Five years ago, my friend and I challenged each other to learn and master a new keyboard layout during our summer internships. Five years later, I submit my report on the benefits and quirks of using Dvorak every day of my life.

Dvorak is an English keyboard layout patented by August Dvorak and William Deasly in 1936. Dvorak (the layout) aims to improve typing ergonomics from QWERTY by optimizing the location of vowels and commonly-used consonants to the home row while moving lesser-used consonants and symbols out of the way.

But what's wrong with QWERTY? It's the de-facto keyboard you know and love, and its layout is...fine, right? It spells QWERTY on the top, so that's cool. But, QWERTY was not designed for modern touch-typists. Intentionally or not, QWERTY is slow and inefficient: commonly used characters are far away from the home row. However, once digital computers became a reality, the keyboard did not change. Users were already used to the old QWERTY layout, so it stuck. Now, it is almost impossible to buy a computer with a US keyboard layout that is not QWERTY.

I can't remember exactly why my friend and I decided to try Dvorak. Perhaps it was some blog post similar to this that enticed us. Perhaps it was the "cool" factor (is it really cool? The jury’s still out). In any case, at the start of the summer, we had both committed; we would both use Dvorak full-time for work.

We went full steam ahead. To start, we used the Learn Dvorak tool to get the lay of the land and figure out the initial key placements. The tool was nice because it auto-mapped our system QWERTY layout to Dvorak so that our practicing would not affect our regular typing. 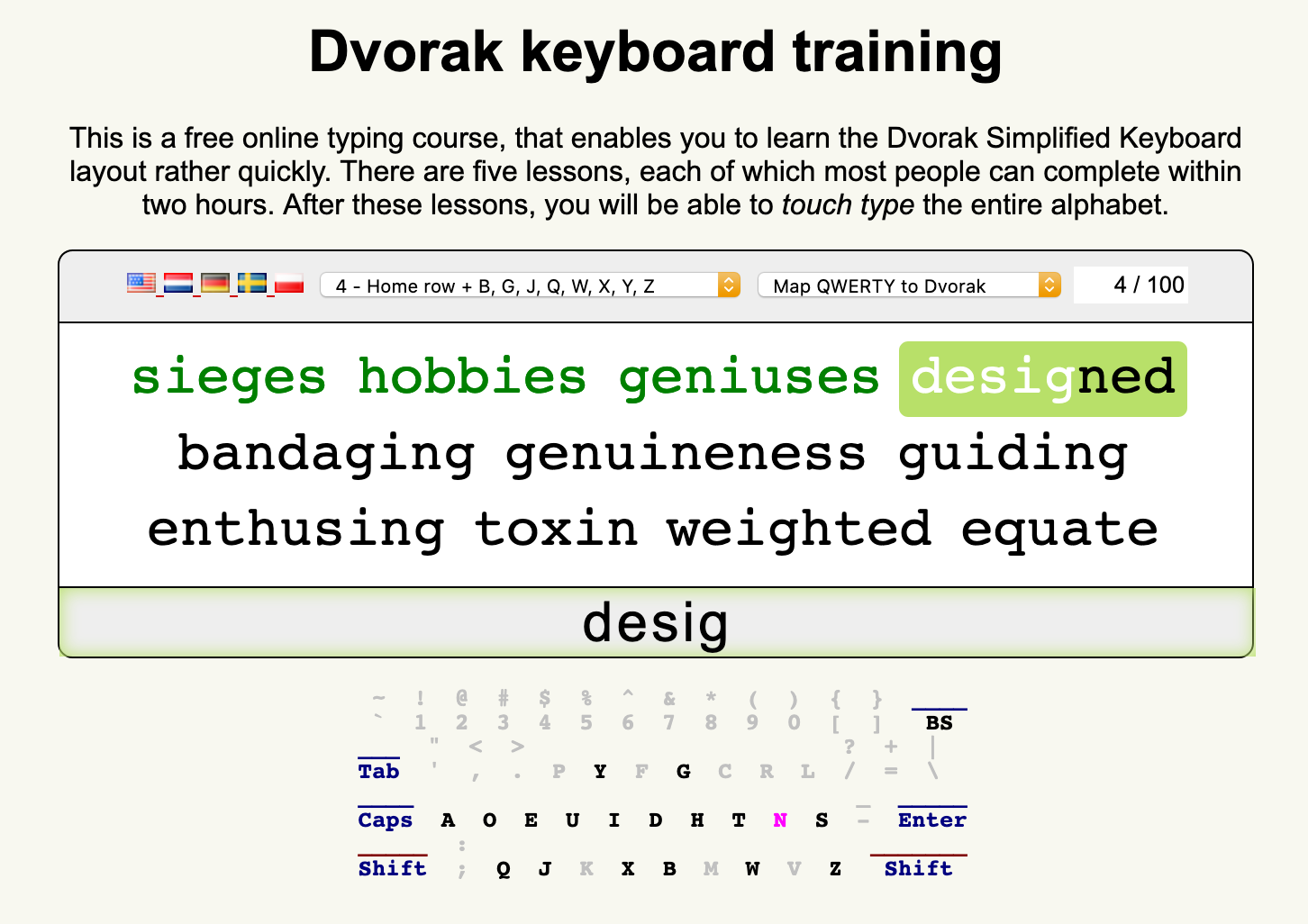 The initial period of learning brought me back to 3rd grade touch-typing class. I remember that we were given plastic keyboard covers to ensure that we didn’t look at the keyboard while learning. However, unlike third grade, I didn't need a plastic cover because I couldn’t look down at the keyboard for guidance: it was still in QWERTY!

Slowly I became “comfortable” with all of the letters, but less-so with the extraneous/low-use keys. Once I completed the tutorial and had practiced separately for around a week, I graduated to cold-turkey and used Dvorak at work. To do this, I switched the system keyboard setting on my Mac to Dvorak and removed the option to switch back to QWERTY.

The first few days were grueling. The worst part was trying to code without being sure of punctuation: periods, commas, semicolons, etc were all in a different place. So, in order to type the following line of code, I needed to know all of the letters in addition to the symbols = . ( ) ;. Let's just say that I did a fair bit of staring at my printed-out Dvorak reference.

Slowly, day by day, I improved. Sometimes, after ~6 hours of struggling with Dvorak, I would give up and revert to QWERTY. At first this felt normal, but towards the middle of the summer I started to have issues with this approach. As my mind moved into Dvorak, the switch back to QWERTY became more difficult and even confusing.

Finally, by the end of the summer, we had done it: both my friend and I could confidently use Dvorak in our day-to-day typing. However, I was not a master at this point. Even after 6 months, I still felt a little awkward with the new layout. Five years later, however, I can’t imagine going back! Dvorak is second nature to me now, and when I try to type in QWERTY I always mess up immediately. It's funny though -- just while typing these sentences I briefly switched back to QWERTY, and it's all still in there, but buried. I think I could switch back to QWERTY if I tried, but at this point it's not worth another 6 months.

If only I had known then what I know now. Alas, the deed is done! I will be a Dvorak typist for the rest of my life. Hopefully learning Dvorak will pay off in the long run, but there's really no way to test that hypothesis emperically. For now, Dvorak is just one of those oddities in life that my friend and I can and will enjoy together.